Bot War is a skirmish game made by a one man company called Traders Galaxy. The game is actually 8mm scale game but its possible to play the game using only 40mm models.
Bot War models can range in size from 8mm infantry to 120mm titans like Leviathan or Squidlorr which are coming soon.

There are over 100 models now available, spread across 7 factions with 3 more factions coming soon.

The game has been inspired by the cartoons I loved back in the 1980s. The story is set in an alternative 1980s Earth where the main ruling nation is called the Democracy.

The basic overview is that the Democracy is invaded in “alternative” 1982 by a nation called Atlantica, led by the ruthless King Gills. This undersea nation had been hidden from the surface for millennia. The attack from Atlantica was a complete surprise and the most powerful nation on the surface, The Democracy, was facing utter defeat. When all seemed lost, a dimensional prison smashes to Earth after colliding with a craft. The craft breaks into pieces and the most intact piece crashes near the Democracy citizen militia forces.

Inside the craft are the Valiants, immortal beings who are emissaries of the One. A supreme being of immense power. They were chasing the dimensional prison filled with bodiless evil entities called the Deceivers.

Taking pity on the desperate humans, the Valiants make an alliance and push King Gills forces back into the sea, freeing the Democracy and ending the first Atlantican war.
After King Gills retreats, the citizen army then turned their attentions to the corrupt power in their own Government. These corrupt individuals flee retribution and form Snake Corp. An evil corporate war machine using black market Bot technology for evil purposes.

Meanwhile, the Deceivers had been freed from their prison, and with no bodies, possess some corrupted humans who build them a factory to create physical bodies as powerful as the Valiants.

Thus in “alternative” 1985 the Bot War begins with these 5 factions, Valiants, Deceivers, Atlantica, Democracy and Snake Corp.
Not long after King Gills defeat, a comet hits the ocean causing massive tsunamis. In the comet was a Bot of significant strength and power – Omen. King Gills salvages Omens body and starts his studies, which led to King Gills producing his own version of Bots to counter the Valiants.

With the Deceivers in new physical form, they immediately start creating distrust between the Valiants and The Democracy which leads to the Democracy rejecting with suspicion most of what Bot technology has to offer, instead preferring to rely on trusted human tactics and equipment. Only a small specialist research team under the command of Democracy’s greatest heroes are permitted to research Bot technology .

In the first year of Bot War 5 additional new factions have arisen.

Due to the origins of their imprisonment the Deceivers have learnt that they carry the curse of Infestation. This curse means that with each body destruction their code becomes more fragmented and error riddled, changing them with each resurrection, to eventually become Infesters, debased and depraved Bots with little left of who they once were. These reprobates are led by The Queen. A hugely powerful Bot created by accident in a Deceiver plot to control of the Infester curse.

The Trashers are a faction of former Valiants who have committed a great offence whilst on Earth and have downloaded the Trasher code of repentance. This code changes their physical appearance giving them much greater resilience but poorer targeting. They cannot return to their Valiant cousins until they atone through deeds of great valour in arms.

The Overlords are huge alien monsters from a planet obsessed with gambling on gladiatorial games that pits huge mutant beasts against one another in fights to the death. The Overlords are masters of gene mutation and travel the galaxy looking for the most powerful creatures to splice together. On Earth, the Overlords are testing their latest progeny against the Bot War. Hoping to hone the skills of these beasts and achieve ultimate glory and prestige back home in the arena.

The Beastlords have been on Earth for some time having been first sent by the One during the dark days of the dark ages. Since that time, they have been the silent watchers for humanity. Beastlords are the only mortal Bots, as their code is known only to the One and it is not compatible with any known download factory.

The Red Star nations refused to lend much aid to The Democracy during the first Atlantican war as they had been enemies with the Democracy and its allies for 40 years. However, since the first Atlantican war ended, the Red Star Nations have come under attacks from many of the factions involved in the Bot War. Of these, the most devastating has been from the Overlords. Because of their distrust and limited access to Bot technology, the Red Star nations have focused their war efforts on cybernetic technology. Joining Bot enhanced weaponry to some of Earths most powerful creatures both past and present.

Thus the Bot War rages across a 1985 alternate Earth.

The game of Bot War is played with about 5-10 models per side and this size game will last about an hour. Unlike most skirmish wargames the game is played strategically as a resource distribution game as well as tactically like a regular wargame. The rules themselves are really easy to learn but mastering the game can be quite difficult. There are a few videos showing a game being played through as well as some good commentary on the this website. There are 10 scenarios included in the rulebook.

Overall, Bot War is a fun game with some cool nostalgically inspired models. It is especially suited to narrative thematic games and campaign games.

Traders Galaxy is an Australian company and all shipping is from Qld Australia. I offer free shipping for all orders over $150usd.

There are over 500 Bot War members on the Facebook group so if you are interested in Bot War, please join the awesome community of enthusiastic Bot War gamers and hobbyists.

All Bot War models are currently metal, however the larger models coming soon will be in resin. 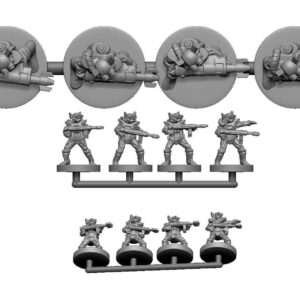