Note – orders are shipped when all items in the order are available.

This metal multipart kit has enough parts to make 1 x Vyper Jeep, 1 x ABM and 1 ABT.

The Vyper jeep is the common light workhorse of the Snake Corp arsenal.  Able to transport a small section in the most difficult terrain the vehicle is also equipped with an impressive anti air missile system.  However even more impressive than that is the fact the Vyper is not a typical vehicle.  Bot technology runs the vehicle and it often operates as a support vehicle for Snake Corp Bots.

The ABM or more accurately the ABMs stands for Anti Bot Missile System.  This weapons system is the pinnacle of Snake Corp antibot technology and has the ability to scramble the circuits of any electrical device within its blast radius.  The vehicle is mobile but the most effective deployment is a static one which allows this devastating weapon to reach its true potential.

The ABT stands for Anti Bot Tank and primarily refers to the main armament for the tank.  This is a high velocity gatling weapon capable of firing a stream of glowing laser particles which penetrate Bot shields with ease. 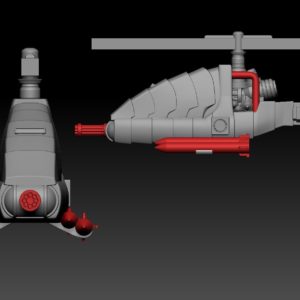