The full details as to why Basher chose to download the Trasher code of penance remain obscure. It is known that he was previously a specialist tasked with protecting some key members of the new Democracy. Basher had been assigned to protect a wealthy inventor of new weapon systems during the final stages of the first Atlantican war. Needless to say Basher failed in his duty and the inventor was murdered.

As a result, Basher exiled himself in shame, downloading the Trasher code in order to redeem himself.

Like all Trashers, Basher wields his axe (Smiter) with reckless abandon, hewing down Bots or Vehicles with equal ease.

Bruiser loves a good scrap. Like most Trashers, mystery surrounds Bruisers origins. All that is known is that Bruiser was not previously a Valiant! This is confusing to everyone including many Trashers if they had the capacity to spend any time pondering the implications of such greater conundrums.
How non Valiants can have access to the Trasher code is unknown even to Recovery who is the expert on all things related to the One.

Like all Trashers, Bruiser excels in brutal Close Attack fighting but does so with a style and ferocity quite different to most other Trashers.

Smasher is an old code, even by Valiant standards having been one of the first codes created by the One.  As such, he was sent on the mission for his wisdom in an advisory role to General Duke.  Having been caught between two bad choices, Smasher chose the path less likely to cause the worst consequences.  However in a cruel twist of fate the situation was a Deceiver trap and many Democracy citizens lost their lives.  As a result, Smasher resigned his post and downloaded the Trasher code.  Taking on the vow of repentance until his return to the One.  Smasher is aptly named because his chosen weapons of redemption are a large hammer and shield.  Often both are wielded as clubs and Smasher cares not for the finesse of stylish combat.  According to Smasher he is there to smash his way to redemption and he does that very well. 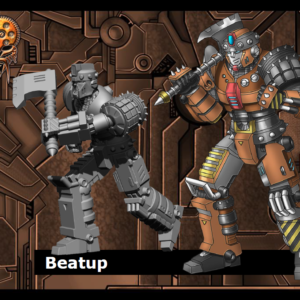