This set comes with enough parts to make Hotwheel, Topshot and Recovery

Hotwheel is the leader of the Bashers, a sub faction within the Valiant population made up of bounty hunters and scoundrels united in their hate and distrust for Deceiver, Atlantican and Snake Corp Bots .

Not the largest Bot by any means, Hotwheel is still much stronger than his size suggests.

Topshot has often been accused of being an Atlantican sympathiser, mostly by Hotwheel.
It is true that Topshot thinks that the Atlantican Bots are more just misguided than evil, unlike the Deceiver or Snake Corp Bots.

It is also true that Topshot has had Hydro dead in his sights and has failed to pull the trigger. Whatever the truth Topshot is still a valuable and worthy member of the Bashers and no one is surer of this than Hotwheel himself.

Recovery is the medic for the Bashers. He is the closest thing to a gentle giant in the Valiant forces. Armed with his combat shield he is a very tough bot to crack. 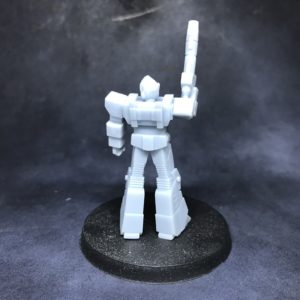